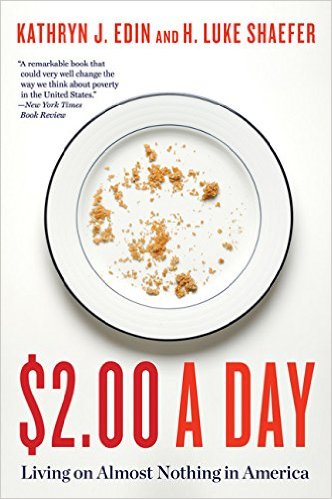 Writers Kathyrn J. Edin and H. Luke Shaefer will discuss their work at a special appearance for the Washtenaw Reads 2017. Doors will open at 6:00 p.m. to offer the opportunity to connect with community agencies and representatives who will be staffing information tables in the lobby. Copies of $2.00 A Day: Living on Almost Nothing in America will be for sale and the event will include a book signing by the author.

The $2.00 a Day website has numerous resource links such as a Poverty Risk Calculator, How Much Do Poor Americans Work? A Comparative Analysis, Can Poverty in America Be Compared to Conditions in the World's Poorest Countries?, Is Welfare Helping Poor Children?, etc.

Kathryn Edin and H. Luke Shaefer. "20 Years Since Welfare 'Reform': America’s poorest are still dealing with the consequences of the legislation that Bill Clinton signed into law two decades ago today" in The Atlantic, August 22, 2016

Daniel Hemel. "Bringing the Basic Income Back to Earth" : Review of Raising the Floor: How a Universal Basic Income Can Renew Our Economy and Rebuild the American Dream, by Andy Stern with Lee Kravitz, and In Our Hands: A Plan to Replace the Welfare State (Revised and Updated Edition), by Charles Murray in the New Rambler, Posted 19 September 2016.

Christopher Faricy makes a return visit to New Books Network for Part II of a conversation about Welfare for the Wealthy: Parties, Social Spending, and Inequality in the United States (Cambridge University Press, 2016) and the ways in which the U.S. welfare state is configured to obscure its real beneficiaries. We’ll also talk with Professor Faricy about what a Trump Presidency and unified Republican control of Congress might mean for tax policy, social spending, and inequality.

Vicki Lens. Poor Justice : How the Poor Fare in Court (OUP, 2015). It’s been said that for poor and low-income Americans, the law is all over. A conversation with Vicki Lens, who, in Poor Justice: How the Poor Fare in Court (Oxford University Press, 2015), shows us how vulnerable populations interact with the legal system. Prof. Lens will talk about fair hearings for welfare applicants, cases of child maltreatment and neglect, the ways in which the law protects and coerces people with mental illness, and the implications for homelessness on New York’s right to shelter.

National Poverty Center at the University of Michigan was established in the fall of 2002 as a university-based, nonpartisan research center. The Center produces many types of publications: working papers, briefs, books/volumes and multi-media.

SPENT is an online game about surviving poverty and homelessness created by ad agency McKinney for pro bono client Urban Ministries of Durham, whose mission "is to provide food, clothing, shelter and supportive services to neighbors in need

Kelsey Lucas. "9 Facts about How the Poor Live in America" in The Daily Signal, September 15, 2014.​ (infographic included)

Andy Warner. Infographic: What does it mean to be Poor in America? in The Lowdown: Connecting newsroom to classroom (KQED News), October 8, 2013.

Review by Jonathan Cohn in the Huffington Post (September 3, 2015).