A guide to the Thomas A. Fleming African American History and Literature Collection 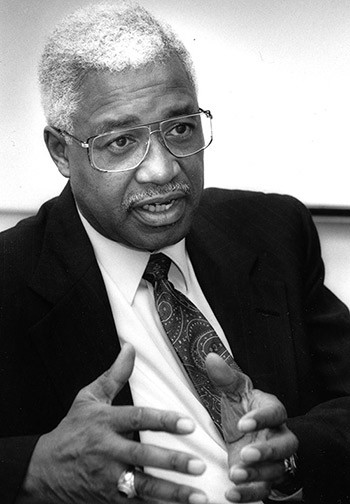 A Biography of Thomas A. Fleming

Thomas Fleming was born in 1933 in Southeastern Pennsylvania. Soon after he was born, Fleming was sent to live in Detroit, and was raised by his grandparents. The neighborhood Fleming grew up in, and schools he attended were in predominantly white areas of Detroit. Teachers didn’t seem to pay much attention to him because he was black. Fleming was looked over as a trouble-maker, or a student not worth teaching. Because of his poor educational experience Fleming lied about his age and joined the National Guard at 16 years old. Fleming ended up serving his country on active duty in Europe during the onset of the Korean War.

Fleming’s passion for both reading, and his devotion to his Christian beliefs blossomed while he was overseas. His grandmother had always advised him to turn to the Bible in times of trouble. When Fleming opened his New Testament issued by the government, he realized that he couldn’t read it. Fleming’s desire to read his Bible increased and led him to join a Bible study consisting of soldiers. His experience in the study group led him to his decision to dedicate his life to the education of troubled youth.  He wanted others become “a person who reads”.

Soon after the completion of his duties with the National Guard, Thomas Fleming returned to the Detroit Area. He was so inspired from his experience abroad that not only did he earn his GED, but he also enrolled in the Detroit Bible College. At DBC, now known at William Tyndale College, Fleming earned a bachelors degree of religious education in 1965. His first teaching position was at the W. J. Maxey Boys Training School. This school was an institution for juvenile offenders. Unlike some of the other staff at the institution—Fleming new that these boys still had potential, and that they were not lost causes.

Fleming’s wife Diane believes that as a young adult, Fleming developed a spiritual foundation and discovered the Black history that he never new. Both of these things fueled his passion for reading and then his professional career, including his teaching methods with “at risk” youth. He would see these marginalized kids and felt that he could help and empower them.

From the very beginning it was clear that Thomas Fleming had a passion for learning and for teaching. He collected hundreds upon hundreds of books that were eventually donated to Eastern Michigan University’s library. In 1991 he was named Michigan’s teacher of the year. In 1992, Fleming received the honor of being named National Teacher of the year highlighting not only his success but also the adversity he overcame.

In the years following Fleming became more involved at Eastern Michigan University after receiving his master’s degree there in 1968. In 1993 Fleming was granted an Honorary Doctorate of Education by EMU. That same year he began his position of Special Assistant to the Provost at Eastern. During this time Thomas Fleming continued to be a mentor to many students, and inspiring them to become “a person who reads.” His passion and focus was always on the promotion of literacy and education. He believed that anyone could develop his same passion, no matter what his or her background.

Fleming ended his tenure at Eastern Michigan University in 2003. In 2006 the Thomas A. Fleming African-American History and Literature Collection was established at the Halle Library at Eastern Michigan University. Its maintenance and ongoing development are aimed at providing many generations the opportunity to become scholars and to be inspired by the vision and life of Thomas Fleming.

Thomas A. Fleming passed away on November 4, 2010 in Ann Arbor, Michigan. His legacy will forever be remembered. The many people he inspired will never forget the man who taught them to be “people who read”.