The Conservatory of Music and Old Main, 1853 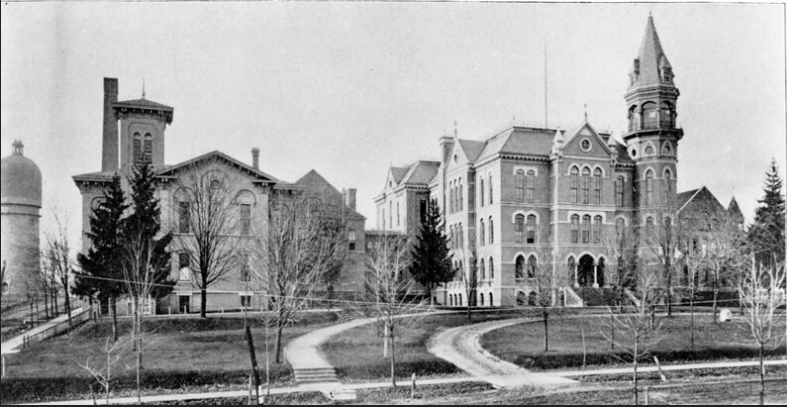 In 1854 the regular teaching of music began and Michigan State Normal School under the direction of Albert Miller:

"Up to the spring of 1854 the State Normal School had no musical department. I was invited to assist in organizing one, and to have charge of it. There were at that time, and indeed during the four years of my incumbency, no musical instruments of any kind in the building, a fact which made it exceedingly awkward to render teaching effective or interesting. Nevertheless we organized classes in vocal music, all of them starting with the first rudiments as laid down in Taylor's text-book, The Chimes. Students procured their own books, all other music I furnished myself, as there was no other provision made for that purpose."

"My directions from the State Board of Education were very meager; the only one I remember was to the effect that every student should be taught music and no one should be allowed to graduate who could not pass a satisfactory examination, even where it should be found that he had very inferior, or no singing qualifications at all. There was no exception to this rule..."

Professor Pease on Professor E.M. Foote, chair of the music school in 1858:

“He was one of that famous class of convention leaders who did so much to arouse an interest in music throughout our land. He possessed a fine, ringing voice, commanding presence, and other qualifications which a popular leader required. The change from the classical and somewhat severe work which had been done, to this light and pleasing study of songs of the day, was highly appreciated by the students and citizens and proved conclusively that the first had been of too high an order and was too far above the heads of the people. The music sung was descriptive, sentimental, patriotic, and told sweet tales of love and home. All this could not last, but it served its purpose of leading to better things, and Professor Foote will be remembered by the normal students of that tie with love and thankfulness.”

Prospective students to the Normal that lacked sufficient preparation were required to complete preparation in the school through three courses, Common School Course, Higher English Course, and the Classical Course. 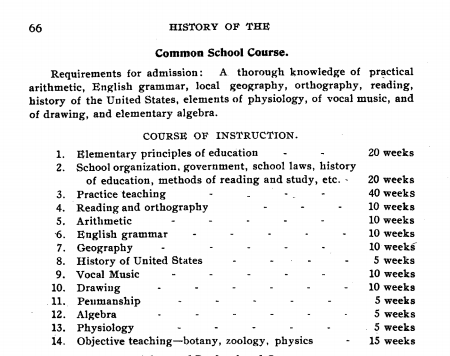 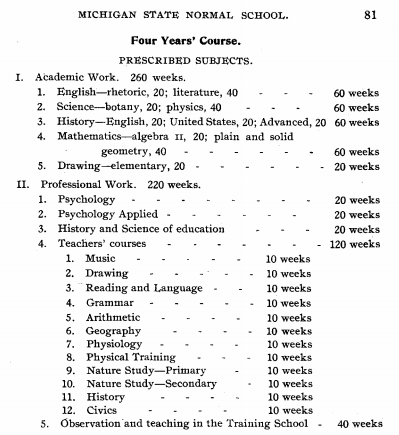 In 1868 vocal music is made part of the regular course at the school.

A District School course was added to the catalog. This course was to provide special instruction for Normal students who intended to teach in the district schools. It required an elementary knowledge of "Vocal Music, Drawing, Natural Philosophy, Botany, and Natural History."

“The course in vocal music in the Normal School is sufficiently long and thorough to prepare teachers to give the elementary instruction usually required in this subject in the public schools, yet there is a great demand for teachers who can do more advanced work as well. In view of this fact, the State Board of Education arranged with the professor of music in the Normal School to organize and become director of the Normal Conservatory of Music. Thus, associating with himself able and efficient instructors in the various departments of the science and art of music, and providing, without any additional expense to the State, ample opportunities to the students in the Normal School to pursue, to any desired extent, the study and practice of vocal and instrumental music.” 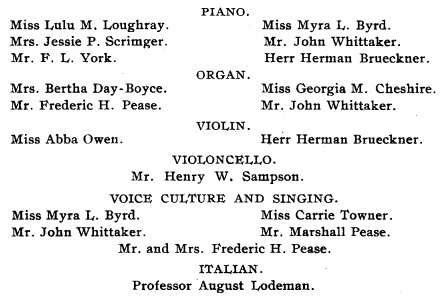 The Conservatory of Music and Ypsilanti

The existence of the Conservatory stimulated several activities that were a cultural advantage to The Normal School and the community. Public recitals were held by Conservatory students, informal recitals known as “The Wednesday Four O’Clocks” were given by students, in 1895 a Normal Lecture and Entertainment Course began and extended for many years and during this time the Normal Choir performed an annual concert, private lessons were offered to Ypsilanti citizens as well as students and Ypsilanti talent was included in the chorus and orchestra.

The Conservatory of Music existed until 1955 when it was absorbed into the Department of Music.